Why would an owl get hit by a car?

This Northern Saw-whet Owl was hit by a car! In this video, after recovering at WildCare he flies free.

As the clocks fall back and the days get shorter, WildCare sees a significant increase in the number of animals hit by vehicles being brought to our Wildlife Hospital.

Although he’s smaller than most, this Northern Saw-whet Owl was no exception— he got clipped by a car on twisty Lucas Valley Road in Northern San Rafael.

Owls are raptors that hunt for prey on silent wings. This tiny predator feeds mostly on insects and small rodents.

When highway maintenance crews mow the grass verges on the sides of our highways and roads, they attract mice, rats and insects with the shorn grass and fallen seeds, which, in turn, attract hungry owls.

Owls are hit by cars surprisingly often—WildCare’s Wildlife Hospital has admitted 5 “hit by car” owls just this year, and our records show we have admitted 18 in the last three years.

A hunting raptor may dive for a mouse or vole on the road side and then take off from his kill directly into the path of an oncoming car. To avoid hitting an owl (or another bird of prey), watch for the flash of feathers that indicates a bird about to fly. Watch also for eyeshine at night—driving with your high beams on (when appropriate) can catch the reflective glow of an animal’s eyes just before he darts into your path. Slowing your speed allows you time to brake without swerving.

Caring for the owl 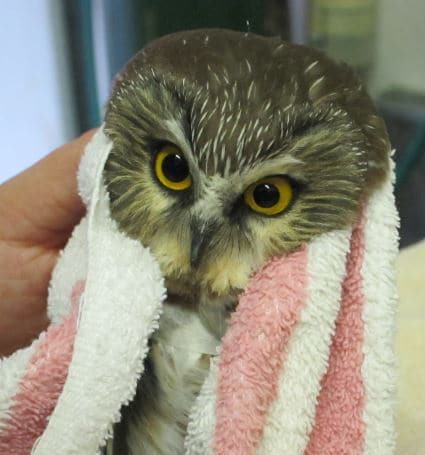 This Northern Saw-whet Owl is so small the driver of the vehicle said he didn’t even see the owl before hitting him, but fortunately he knew to bring the bird to WildCare.

During his intake exam, WildCare Medical Staff noted that this owl was very aggressive (the smaller owls usually are!) and had some signs of minor head trauma but that he had no major wounds or injuries upon examination. Radiographs were taken to confirm that he had no broken bones.

He was placed in an intensive care ward where, the next day staff noted he had not eaten. The decision was made to hand-feed the owl pieces of mouse, which a WildCare volunteer offered him on tweezers (click here to learn more about volunteering with the amazing animals at WildCare!)

Over the next several days, the owl ate more and his condition steadily improved. Medical Staff gave him the opportunity to fly in the hallway of our aviary, and noted improved flight height and endurance each time.

Finally, it was time to release this owl back to the wild. As you can see in the video above, his release was very successful.

Give wildlife of all varieties a “brake”

The best way to avoid hitting a wild animal with your car is to slow down and pay attention to the sides of the road. Like raptors, coyotes and other small- to medium-sized predators also hunt on the verges of the roads, placing them in a vulnerable position. Watch for eye shine (the reflection of an animal’s eyes in your headlights) as you drive.

Squirrels and other foraging animals are very active right now too, as they collect acorns, seeds and other foodstuffs to prepare them for the chilly winter ahead. Watch for movement in the leaves and grass at the road side and remember to go slowly and be ready to stop, especially at dawn and dusk when animals are most active.

Despite their size, deer are frequently victims of vehicle collisions, especially this time of year. The autumn months are the mating season for Black-tailed Deer, which means these long-legged animals are very active right now.

Nearly every doe is followed by an interested buck— sometimes more than one. If you are driving and you see a deer crossing the road, slow down and keep your eyes open because there will almost certainly be another deer or two following behind.

Keep in mind that deer (and other animals too!) follow established paths, and will often cross roads at points near water. If you’ve seen deer or other wildlife in a certain spot on your regular drive, it is very likely you’ll see animals there again. Especially if there is access to a creek or stream at a low point in the road, remember that animals will be crossing.

If you do hit an animal with your car, remember to contact WildCare’s Hotline at 415-456-SAVE (7283) or, if you’re in Marin County, California, the Marin Humane Society at 415-883-4621 for assistance. If you don’t live in Marin County, click here for a listing of wildlife care centers by state.

Many animals can survive a collision with a vehicle if they receive timely medical care in WildCare’s Wildlife Hospital.

With the end of Daylight Savings Time, WildCare sees a spike in hit-by-car animals. Click here to donate now to help us care for every wild animal who needs our care!