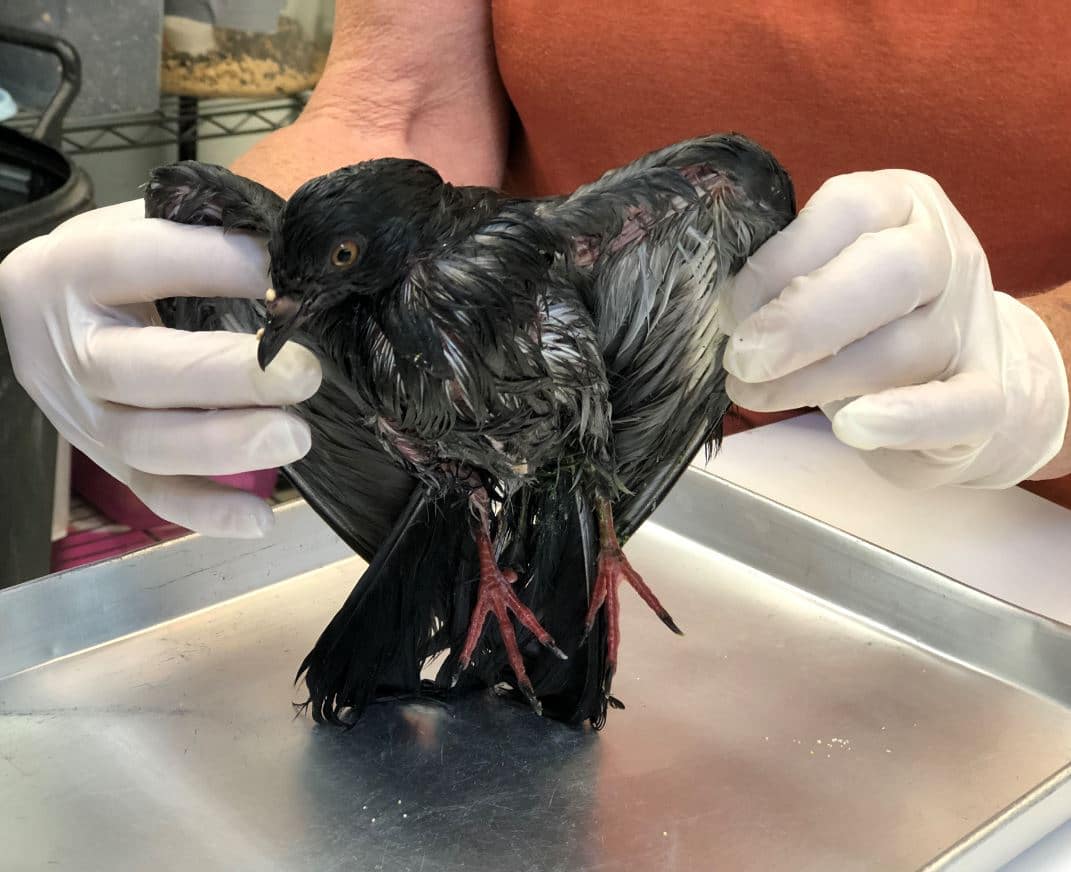 On October 13, a passerby found three pigeons with sticky, matted feathers, struggling to fly and walk in front of a grocery store in the Nob Hill area of San Francisco.

Realizing the birds were in trouble, rescuers brought them, stressed and terrified, to WildCare, where Medical Staff took immediate steps to hydrate, warm and calm them.

The birds were too unstable to attempt cleaning them that day, so we allowed them to rest and gave them supportive care. We attempted to wash them the next day.

Sadly, nothing WildCare had available for cleaning the birds had any impact on the sticky substance.

Over the course of the next few days, eight more pigeons came in from the same location. These birds were even more covered with the sticky gel than our first patients. The birds’ clumped feathers stuck to their cage liners, they got covered in birdseed while trying to eat, and their skin was becoming red and irritated from chemicals in the gel.

Medical Staff knew we had to get the sticky gel off the birds, but we still didn’t know how!

To mitigate the effects of the stickiness and allow the birds to move freely, sit comfortably and eat and drink, Medical Staff made the decision to cover the birds in cornmeal to prevent their feathers and limbs from sticking to themselves. Watch this process in the video below. The cornmeal treatment was effective, rendering the birds much more comfortable while we continued to look for a way to clean them.

To help solve the mystery of what, exactly, was on these pigeons, WildCare Medical Staff contacted the property manager of the building where the pigeons were found. In their condition, the birds wouldn’t have been able to go far from where they had been contaminated. The property manager was appalled at the harm done to the birds, and directed us to contact the store manager.

Apparently, in answer to customers’ complaints regarding bird feces on the sidewalk, the store had hired a company that specializes in “pigeon abatement.” The photo to the left shows the top of the sign at the grocery store. Note the thick, clear-white ribbons of gooey gel applied across the entirety of the sign. The only good thing about the situation was that the sign was the only place to which the product had been applied, not the entire roof of the building as we had feared.

This is a product called “Birdbgone Transparent Bird Gel” which is advertised as a “bird repellent gel for use against pigeons, starlings and sparrows.” The abatement company had assured the store manager that it was humane and non-toxic and that birds would not be hurt. The theory is that the birds land on the substance, don’t like how it feels on their feet, and fly away.

Sadly, in WildCare’s experience, applications are typically too thick, and birds who land in the gel panic and get it all over themselves in their struggles to escape. Just like glue or sticky traps, gel is also indiscriminate, so when smaller songbirds land on the substance it can be a death sentence for them, as they are too small to break free of the gel.

We were surprised and delighted that, once he learned what was happening to the birds, the grocery store manager immediately called the abatement company to remove the gel. It’s hard to remove, but they solved the problem by covering the gel application site with the red tarp you see in the photo to the right.

WildCare will continue to work with the grocery store to help them find ways to deter the pigeons without harming them. In this situation, we would recommend the use of “bird deterrent spikes,” but the placement is important. Pigeons like to perch on the edge of ledges so they can look down. Spikes must be placed along the exact edge of the sign to deter the birds from landing. Three lines of spikes along the top of the sign, with special focus on the edge of the sign, would likely be a full deterrent.

We’re sad to note that the abatement company insists that this is the first time that a situation like this has occurred, and maintains their claims that the product is safe and humane for birds. Needless to say, the use of gels is never safe for wildlife.

Based on past experience, and the extreme level of contamination of the pigeons, we knew that we could not get them clean in our sinks. We reached out to our friends at International Bird Rescue (IBR), the wildlife care center in Fairfield, California that focuses primarily on water birds affected by oil spills. They have specialized heated and pressurized hoses specifically designed for cleaning birds as fast and efficiently as possible.

Thanks to our dedicated Transport Volunteer Team, we were able to drive the pigeons to IBR in small groups to be washed and given time to regain their waterproofing. Some of the birds required two to three baths over the course of a couple weeks.

Once completely clean and waterproof, the birds returned to WildCare for some aviary time to rebuild their endurance.

Despite their ordeal, we’re happy to announce that all of the pigeons survived their ordeal!

Now that they’re clean and healthy, WildCare volunteers are releasing the pigeons back to their home territory in the Nob Hill area this week.

City pigeons face a lot of challenges, and we’re so grateful to all of the people who cared enough to help these poor birds and give them a second chance at life.

Click to donate now to help WildCare help pigeons (and all our wildlife patients!)

WildCare is proud to be one of the few wildlife care centers in our region that accepts pigeons.

Start a monthly donation now to help us always be ready to help wildlife, of any species!