It’s not easy being a snake in our neighborhoods, even though snakes actually make great neighbors!

Gopher Snakes like these eat primarily rodents, with other small animals and even eggs on their menu when they can find them.

They will move through your yard hunting rats and mice and providing a real service with their free rodent control! Tragedy happens when they run into things like garden netting.

These three snakes were likely pursuing the same prey when they got entangled. As each snake tried to extricate himself, the strands of netting got tighter and tighter. Eventually the snakes were hopelessly tangled into a tight ball with no chance of escape.

Fortunately the homeowner saw them and knew to call for help. Marin Humane officer Adrianne Russo transported the snakes to WildCare’s Wildlife Hospital.

The first job for our Medical Team, of course, was to untangle the netting from the snakes’ bodies. But treating entangled animals goes way beyond the necessity of removing the ensnaring object. WildCare cautions readers that anyone who finds an animal of any variety tangled in anything should bring that animal to WildCare or your local wildlife care center immediately, even if the animal appears uninjured after you free him. The injuries resulting from entanglement are called constriction injuries, and they can take days or weeks to manifest.

The challenge is to snip the netting without hurting the snakes, which was difficult because they were so tightly bound. We use special scissors that are actually called ‘suture scissors’ for removal of sutures in human hospitals. It allows us to get under the tight line without creating as much pressure as larger scissors would cause and we can be more precise. 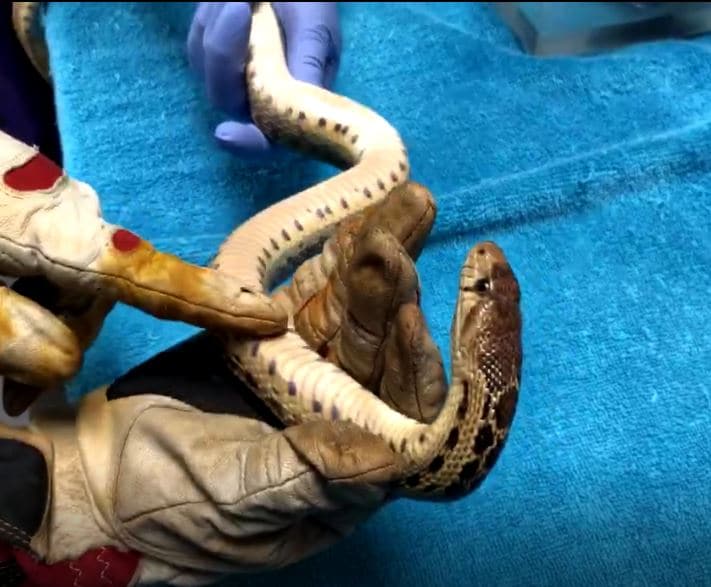 The team also had to determine how many snakes there were, and to be sure they were harmless Gopher Snakes and not rattlers! Then they had to figure out which parts belonged to which snake. There were only two staff members available for removal so they worked as quickly as they could to try to separate the netting into chunks, and then to remove the individual snakes

During this procedure, the snakes themselves were scared and stressed so they struggled, tightening the line more, and they tried to bite. Medical Staff did not sedate the snakes because they knew the animals were very dehydrated and they didn’t want to stress the snakes’ bodies more.

Once they had been separated from the netting and each other, Medical Staff allowed them to soak to rehydrate. They were thankfully not emaciated, as they were found relatively quickly, but they were certainly dehydrated. Snakes can drink through their mouth and also absorb through their cloaca.

Finally, they set up the Gopher Snakes in a heated enclosure in Ward A for a period of observation to see if major injuries from compression and the loss of circulation would ensue.

These snakes had been comparatively lucky! They were rescued quickly, and the netting hadn’t had time to severely damage their bodies before they were rescued.

After a week under observation, and with daily soakings in warm water to hydrate them, our team deemed two of the snakes healthy enough to return to the wild. Watch a video below of our team doing a health check on the snakes to see how they are recovering from their ordeal.

Release Day is the Best Day!

It was a real pleasure for two WildCare staffers to return these handsome snakes to their home territory. Watch the release in the video below. The third snake remains in care at WildCare with some scale damage. He will likely be released after he sheds his skin, revealing healthy scales underneath.

What’s the take-away message from the story of these Gopher Snakes? Please don’t use garden netting! This plastic mesh, intended to protect plants from marauding animals causes untold damage to wildlife of all varieties. WildCare has admitted opossums, birds, skunks and hundreds of snakes tangled in the stuff.

If you can’t convince your neighbors to remove their garden netting completely, WildCare asks that the netting be rolled up and secured with binder clips six inches to a foot above the ground. This will at least prevent snakes and other ground-dwelling animals from being entangled. Even with the netting rolled up, it MUST be checked twice a day (morning and evening) for trapped animals. Any entangled animal should be brought to WildCare immediately.

Help WildCare treat animals of all species in our Wildlife Hospital! Click here to donate now!